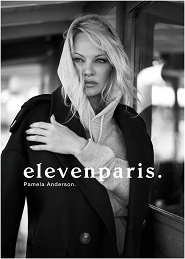 The brand relaunched under the guidance of Vog Group, which became the new owner. The Parisian label released a new ad campaign shot by photographer Mathieu Cesar. Fronting its women’s collection, Eleven Paris has tapped Pamela Anderson, while Gabriel Kane — the model, singer and son of Isabelle Adjani and Daniel Day-Lewis fronts the new men’s collection.

But the revival of the brand and its image has indeed been set in this ad campaign, according to Dan Cohen, co-founder of Eleven Paris, who Vog Group kept on after the acquisition.

“We are completely in tune with our urban spirit, with this very nineties feel,” said Cohen. The ad imagery is primarily being launched this month in September, firstly across major press publications, but also in the streets and in the Paris metro.

Eleven Paris is also heading to the Who’s Next trade show, held from September 8 to 11. “This is where we started, so it makes sense for us to come back as we restart the story,” said Cohen.

The has reopened six of its former shops and will soon have a seventh in Cannes, France.  New Eleven Paris addresses are also in the works for the west of Paris for the end of the year.