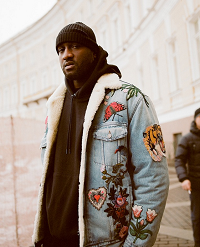 Off-White‘s Virgil Abloh taking the helm at another luxury house is in the rumor mill again!

Earlier today Thursday (August 31), rumors shook-up the fashion industry when it was falsely reported that Abloh is in the process of “signing a deal” to take the helm of Versace. However, it’s fake news! A spokesman for the Milan-based fashion house has vehemently denied the reports. “This is categorically a lie. Nothing similar is happening,” the spokesperson for  the iconic house said to FashionNetwork.

This entire rumor was stupid and didn’t make any sense. Why would such an iconic luxury house like Versace hire Abloh? He has no formal fashion design training.

The house’s creative director for the past two decades has been Donatella Versace, who took over after the death of her brother Gianni, the brand’s founder, in Miami in 1997.

Last February, DM Fashion Book confirmed that Riccardo Tisci has exited French house Givenchy, after 12 years at the helm (see it here). Back then, we also reported that Versace was in talks with Tisci. Versace made overtures to Tisci and held discussions in recent months (see it here). As to why isn’t Tisci officially at Versace yet? Well, he is said to be locked into an iron-clad non-compete agreement with Givenchy and its parent company, LVHM, which serves to bar him from working for a competitor for an unspecified period of time.

The streetwear designer, who Off-White label is based in Milan, was rumored to be running to replace Tisci at Givenchy. However, the house denied mounting speculation that it had held talks with Abloh to take over as creative director of the brand (see it here). The position has since been handed to former Chloe creative director Clare Waight Keller (see it here).