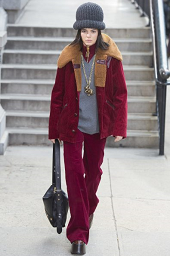 Marc Jacobs May Step Back From His Namesake Brand Back in May 2017, DM Fashion Book reported that American fashion designer Marc Jacobs reduced his European staff, according to sources. The luxury house will operate in a “fully integrated manner” out of New York (see it here).

As part of its ongoing restructuring efforts, Marc Jacobs International is said to have laid off the majority of its European staff, based in Paris.

It was also announced back in May 2017 that Marc Jacobs chief executive Sebastian Suhl would be exiting the company.

In the beginning of this year, Bernard Arnault, chief executive of luxury conglomerate LVMH Moët Hennessy Louis Vuitton, majority owner of the brand, had said on an earnings call with investors that he was “more concerned about Marc Jacobs than the US president.”

Now BoF is reporting that “several sources close to the brand — including current and former employees — are saying that Jacobs may step back from his day-to-day design role or leave the business entirely. Two scenarios have emerged: the company could either hire a creative leader under Jacobs who manages the design team so that he is able to relinquish some of his responsibilities or else Jacobs could leave the company altogether. Either way, sources say Jacobs was unhappy with the brand’s reorganisation under Suhl.”

“A spokesperson for Marc Jacobs and LVMH did not respond to request for comment. But while several former and current employees insist that Jacobs’ future at the company is still in question, others — including those involved in the ongoing business overhaul — say that Jacobs, frustrated or not, is once again highly engaged in the business and is already ‘actively building things back up,’ doggedly working on the Spring 2018 runway collection that will be shown at New York Fashion Week in September. Jacobs is also a meaningful shareholder in the company, which means he has more than his name riding on its future.”

“For months, Suhl’s departure was thought to be imminent, although many believed he would be moved to another role within LVMH, as so often happens when the conglomerate shuffles its top-tier executives.”

“Instead, after three years at the helm of a brand consolidation experiment gone awry, Suhl is leaving LVMH altogether, replaced by current Kenzo chief executive Eric Marechalle, who is credited with transforming the 47-year-old French fashion house — once wholly reliant on fragrance sales — into a viable advanced contemporary label fuelled by the youthful spirit of co-creative directors (and Opening Ceremony founders) Carol Lim and Humberto Leon.”

“At Marc Jacobs, Marechalle is facing a similar challenge, although he must also reckon with the brand’s still-relevant namesake, which adds yet another layer of complexity to an already complicated situation.”

“Furthermore, employees at LVMH’s headquarters in Paris continue to speculate that Jacobs could exit the company altogether, although senior employees in New York find this scenario both shocking and distressing.”

Back in February, Marc Jacobs presented its Fall 2017 Ready-To-Wear runway show at Park Avenue Armory during New York Fashion Week (see it here). In June of 2015, we reported that Marc Jacobs has officially closed his Collection store in Paris‘ Palais Royal, after nine years (see it here), In March of 2015, Marc Jacobs‘ Marc by Marc Jacobs label discontinued, and that collection were folded into the primary Marc Jacobs line (read it here) and industry veteran Iana dos Reis Nunes has been tapped as Marc Jacobs‘ new Global Head Of Communications (see it here).