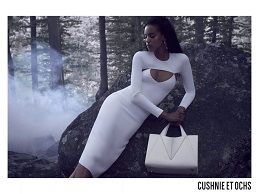 “As female designers, we wanted our Fall/Winter 2017 campaign to embody the strength and independent spirit of our woman,” said designers Carly Cushnie and Michelle Ochs in a joint statement. “In her element, Grace Mahary exudes a sensuality and energy that brings our collection to life.”

The brand was founded in 2008 by Carly Cushnie and Michelle Ochs, upon their graduation from Parsons School of Design.

In 2016, Cushnie et Ochs celebrated a minority investment from Farol Asset Management, expanded their team, and opened their first brick and mortar location in collaboration with the Council of Fashion Designers of America, in a temporary “Retail Lab” space in the Cadillac showroom in TriBeCa, New York City. In late November, the brand announced its plans to expand into accessories and a more permanent retail location.