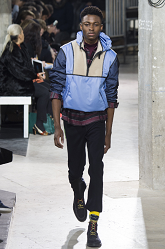 Last week, DM Fashion Book reported that after 15 months and two collections, Bouchra Jarrar was leaving troubled house Lanvin (see it here). She officially made her exit and a new artistic director is on broad.

According to BoF, “The company is also understood to be leaving its Boissy d’Anglas headquarters, where founder Jeanne Lanvin founded her atelier in 1889, and moving to the suburban Levallois area at the end of the year.” Sources have described the changes as “the end of an era.”

“Lapidus was creative director of Balmain Homme from 1985-86 before joining Maison Lapidus, and is the son of the late Ted Lapidus, who designed clothing for The Beatles. Following the closure of Maison Lapidus in 2000, Lapidus worked on capsule collections with a variety of partners, and designed the décor for Paris’s Hotel Felicien.” Most recently, he founded his own maison, “Creation Olivier Lapidus,” which he describes as an e-couture house.

Last year, we reported that Bouchra Jarrar was named the new artistic director of women’s collections at Lanvin, replacing Alber Elbaz (see it here). Elbaz left Lanvin in 2015, after 14 years.