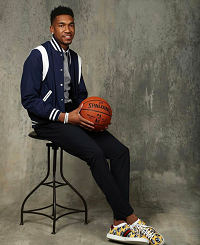 The 2017 NBA draft will be held tomorrow Thursday (June 22), at the Barclays Center in Brooklyn, New York. It will be televised nationally in the U.S. by ESPN.

Malik Monk played college basketball at the University of Kentucky. At the conclusion of his freshman season, Monk announced that he would forgo his final three years of collegiate eligibility and enter the 2017 NBA Draft where he is projected as a first round selection.

We recently reported that Washington‘s Markelle Fultz will be drafted number one by the Philadelphia 76ers and he also signed an endorsement deal with Nike Basketball (see it here).

His outfit was topped off with a pair of $560 Gucci Ace Metallic Leather‑Trimmed Printed Satin Sneakers.

The jacket is available at Luisaviaroma and Matches Fashion.

Cop the sneakers at Gucci.