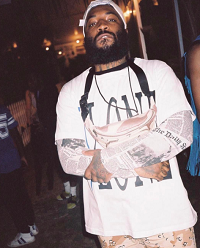 Creative director, stylist and designer A$AP Bari has come a long way from Harlem, New York. The 25-year-old fashion trendsetter is headed to the City of Light. He will show his streetwear line, Vlone during Men’s Fashion Week in Paris. The collection will show later this month.

According to WWD, “Bari, who has no formal fashion training, is a reflection of how things are slowly shifting and brands are starting to work directly with streetwear designers. Bari has collaborated with Nike on a Vlone x Nike Air Force One — he couldn’t say when the high silhouette is coming out — and he’s also partnered with brands including Fragments and Off-White. When asked about rumors of a project with Carhartt, which started when A$AP Rocky was spotted wearing a Carhartt vest with a Vlone logo on the back, Bari said he’s never spoken to anyone from the company.”

“For his collection, which will show on June 23 in the 1st Arrondissement, Bari will present his first cut-and-sew pieces and he spent time in Japan and Italy having different items made. He was mum about what these pieces will look like.”

“I might do a denim program. I might do some leather pieces. I’m not sure,” he said.

“Vlone is known for its pop-ups held all around the world that draw big crowds, but Bari wasn’t sure whether or not he would incorporate a commerce element within his show. He does know that he’s casting models from the street and he will open the event up to a few Vlone fans.”

And although he’s putting on his first show, which he plans on doing in various locations around the world, and inviting press and buyers, he’s still not interested in working directly with stores.

“Buyers can come to the show and get inspired, but it’s still not for the stores. It’s for the people. It’s for the world,” said Bari. “If Barneys wants to come and buy some clothes, they are going to have to buy the whole lifestyle of Vlone and let me shut down Barneys and bring in my own vision. Other than that, they can’t have it. It’s for me. It’s not for someone to take my s–t and resell.”