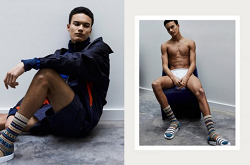 Joel Leon Perreira Is Models.Com ‘Model of the Week’ The 18-year-old model is Trinidadian and German.

He is repped by Tomorrow Is Another Day (Cologne). Below are from excerpts from Perreira interview with Jonathan Shia.

How discovered:
I was scouted on the first of May last year. In Berlin, there’s always a big free festival with loads of music stands and food and everything, and Eva [Gödel, the founder of Tomorrow Is Another Day] just came up to me and asked me if she could take some photos and gave me her card. She said, “You should come to the casting in two days,” and I just thought, I’m going to give it a try, and went to the casting. The week after, she wanted me to go to fashion week in Paris.

What was your first modeling job?
My first job was Givenchy. I did the show in Paris. To be honest, I didn’t even really know what Givenchy was at that time because I wasn’t really into fashion. I only knew big brands like Louis Vuitton and Versace, but I’d never heard of Givenchy, so I just thought, I’ll just do my thing and just stay cool and if it works, then it works, and if not, then not.

What were you doing before modeling?
I was just in school, nothing special. I dropped out after 11th grade because I didn’t really feel like going to school anymore. Then obviously because the modeling was going quite well, I thought, I’ll just give it a try, put school by the side, and then just see how the modeling goes.

What would you be doing if you weren’t modeling?
I guess I would finish school and then just chill for a year and travel and stuff.

Favorite modeling experience so far?
My favorite one, I must say it was the Calvin Klein show in February. The people and the models were just all so friendly and everything. I made quite a lot of friends too. We just had loads of fun.

That was Raf Simons’ debut for Calvin Klein. Did it seem like more pressure than a normal show?
Actually, everyone was just so chill. There was no pressure, really. We just had fun. We danced and laughed a lot and everything. It was just a fun time.