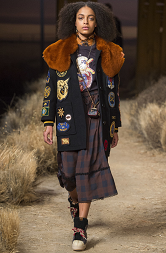 Could Coach Be The Next LVMH Or Kering? American multinational luxury fashion company Coach, Inc. could soon be the next LVMH or Kering.

According to Bloomberg, “Shares in the handbag and accessories maker jumped 12 percent Tuesday after it posted better-than expected earnings. But Coach’s long-term strength will depend on how well it executes on increasingly ambitious plans to join the ranks of the world’s biggest luxury fashion houses.”

“Coach has taken some short-term sales losses by pulling out of hundreds of department stores, closing poor-performing stores, and relying less on discounting. But it has gotten customers to pay full price for its goods again, and it has started to rebuild its image as true luxury player. Sales of goods priced higher than $400 made up more than 55 percent of Coach’s handbag sales in North America, up from 40 percent a year ago, the company said.”

“Coach has been able to successfully reduce discounting and move its customers toward buying pricier handbags.”

“It’s a promising idea for Coach shareholders, if it works,” says Bloomberg.

In January of 2o17, DM Fashion Book reported that Kate Spade New York is ups for grabs. We also mentioned that Coach and American fashion brand and designer Michael Kors are interested in purchasing the American fashion design house, which was founded by Kate Spade and Andy Spade in 1993 (see our original story here). Back then, the two companies’ broads were conversing the feasibility of going ahead with a bid. Two months later (March 2017), we reported that “Coach’s acquisition of Kate Spade could be announced soon (see it here).