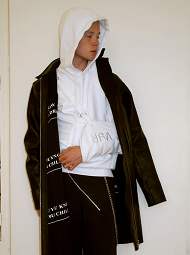 The LVMH Prize Special Winner brand is taking a break!

Hood By Air is ‘on hiatus’ effective immediately.

The once popular and dope streetwear brand and collective, which was cofounded by Shayne Oliver and Leilah Weinraub, just confirmed that it would be put on hiatus effective immediately. Oliver will concentrate on his new role at Helmut Lang, where he will create a special men’s and women’s collection that will be unveiled in September (see it here). The designer also canceled his Paris women’s fashion show this past February. Weinraub, who was the company’s chief executive officer, will focus on filmmaking and her directorial career with her project “Shakedown,” which is featured in the Whitney Biennial and debuted in May.

It is my opinion to say that the brand been lost its credibility, so taking a break isn’t a bad idea at all. According to their representation, Weinraub and Oliver are vowing to bring back Hood By Air “in the near future.”