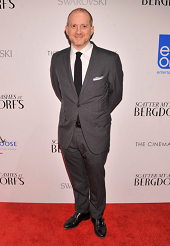 The news was broke via WWD, noting that the seasoned fashion and luxury executive, who also led the Neiman Marcus International business is heading to a multinational company.

During his time at BG, Schulam forged ahead with many big projects for the retailer, despite the uncertain department-store climate.

Last year, he oversaw Rihanna‘s Fenty X Puma collection (see it here), and the unveiling of Goodman’s stylish new main floor. Schulman also made a big statement with the retailer’s shoe business by expanding the main floor, overhauling the contemporary offering and ramping up the hot men’s business.

He also was instrumental in building Bergdorf’s relationship with some of the industry’s hottest stars, including Gianvito Rossi, Aquazzura’s Edgardo Osorio and Francesco Russo.

Currently, the future of Neiman Marcus — Bergdorf Goodman’s parent company — is uncertain. After posting its sixth consecutive quarter of declining sales, Neiman Marcus said last month it would consider putting itself up for sale.

The luxury fashion retailer stated it is “undertaking a process to explore and evaluate potential strategic alternatives, which may include the sale of the company or other assets, or other initiatives to optimize its capital structure.”