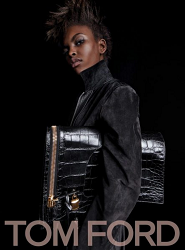 The designer is also returning to the New York Fashion Week show calendar this fall. He will present in Spring 2018 collection in New York, and will seek a permanent slot on the NYFW calendar, most likely the beginning of the week. “I like going first, when everyone is still in a good mood,” he said.

According to WWD, “he’s moving his primary residence to Los Angeles. And he has signed a lease on a studio space in L.A. — the old Regen Projects gallery — where he will relocate most of his women’s design staff. The men’s design studio is to remain in London.”

The designer revealed the news this morning , during a conversation at Spring Studios, where he’s showing his fall collection to press.

Ford said that while instant fashion is likely the way of the future, it doesn’t work now for a simple reason: The industry isn’t ready from a basic scheduling standpoint.

“The store shipping schedule doesn’t align with the fashion show schedule,” he explained. The bulk of fall ships in August, “but you can’t have a show with clothes that have been on the selling floor for a month.” While his clothes shipped by July, Ford kept them off the floor until the day after the show. “We lost a month of selling. We had merchandise sitting in stockrooms,” he said.