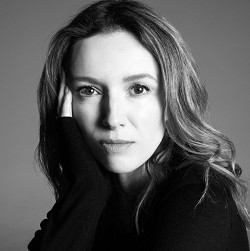 Last January, DM Fashion Book reported that after six years, creative director Clare Waight Keller was exiting Chloé, which is owned by Compagnie Financière Richemont. The British designer made her exit after showing the brand’s Fall/Winter 2017 collection in the City of Lights during Paris Fashion Week on March 2 (see it here).

Less than a week ago, Friday (March 10), we reported that Chloé confirmed it has appointed Natacha Ramsay-Levi as creative director for ready-to-wear, leather goods and accessories, effective April 3. She will show her first Chloé collection, for spring 2018, at Paris Fashion Week in September, the house said (see it here).

Today Thursday (March 16), Givenchy (owned by LVMH Moët Hennessy Louis Vuitton SE) named Waight Keller as its new artistic director, responsible for women’s and men’s wear, accessories and couture. She will be the first woman to run the creative side of the house founded by Hubert de Givenchy in 1952.

She will show her first collection for the French house during Paris Fashion Week in October and has been tasked with propelling its roots as a Fifties couture house further into the modern age.

“I am very happy to have Clare Waight Keller join the LVMH group,” said Bernard Arnault, chairman of LVMH. “I believe her widespread expertise and vision will allow Givenchy to enter the next phase of its unique path.”

“She has this great ability to break the rules and innovate without making a revolution,” said Givenchy chief executive officer Philippe Fortunato, who confirmed the hire exclusively to WWD. “Her very focused approach will help the brand in building the ongoing momentum we have – and taking it to the next level.”

Asked if the industry should expect a radical change in esthetic, Fortunato replied: “You’ll have to wait and see. The development of the Givenchy wardrobe will see an evolution.”

“The fact of having for the first time a woman envisioning the brand, designing for women and men, is unique for the house. That by itself will give it a different angle and a different point of view from the past,” he noted.

May 2 is her start date.

Last month, we officially confirmed that Riccardo Tisci has exited the storied French brand, after 12 years at the helm (see it here). His last collections were the Fall/Winter 2017 Men’s and Fall 2017 Couture, which was shown last month (see it here).