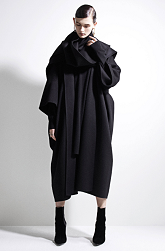 After three years at the helm of Jil Sander, creative director Rodolfo Paglialunga has exited the house. His last collection for the brand was for fall, shown in February in Milan.

The designer succeeded founder Jil Sander, who had briefly returned to her namesake label from 2012 to 2013. Sander also served as creative director from 2003 to 2004. She founded the label in 1973 and was the creative director continuously until 2000. In 1999, she sold a majority stake to the Prada Group. Jil Sander is now controlled by Japan’s Onward Luxury Group SpA.

Paglialunga worked for many years at Prada and briefly at Vionnet before joining Jil Sander.

Chief executive officer Alessandra Bettari said, “We decided to terminate our professional journey with Rodolfo Paglialunga together with the designer himself.” “We want to deeply thank Paglialunga for his great job at Jil Sander and the respect he paid to the brand’s DNA,” added Bettari.

Paglialunga added, “It was a great pleasure to collaborate with everyone in Jil Sander and to give my contribution in the brand’s history and legacy.”