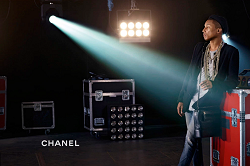 In the past, Williams has appeared in a short film for Chanel and walked the runway in its most recent Métiers d’Art show at the Ritz Paris.

He is breaking barriers! The French house never used a man in its handbag campaign. Williams is depicted in a concert hall toting a crocodile version of the new Gabrielle bag.

According to WWD, the full campaign is “slated to break worldwide on April 3, the ads also features Kristen Stewart, Cara Delevingne and Caroline de Maigret, each exuding a different allure — insouciant, streetwise and quintessentially Parisian, respectively.”

Karl Lagerfeld (Chanel’s couturier since 1983) said he wished to show that the Gabrielle bag can be worn in “many different circumstances.”

“It’s not very feminine in the sense of being chichi,” he teased.

“The ads are to run exclusively as two double-page spreads — the first with a pack shot and a portrait, and the second with a lifestyle scenario. De Maigret, for example, is depicted barefoot in a Parisian apartment, while Delevingne totes a skateboard against a graffiti-strewn security gate.”

In tandem with the print ads are four short films that are to debut on Chanel’s web site and social channels.

The French fashion house has dubbed 2017 the year of Gabrielle, the name of a forthcoming perfume and also jewelry and watch collections inspired by the rebellious house founder.