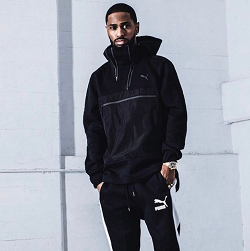 Back in January, DM Fashion Book reported that “G.O.O.D. Music‘s Big Sean is the newest member of the Puma family, joining the ranks of other musicians such as Rihanna and The Weeknd (see it here).”

Today it became official, with the athletic company confirming the partnership on social media. “A new collaborator. A new voice. Welcome the Detroit Don @BigSean to the team. Spring 2018, we’re coming for you,” via Puma‘s Instagram.

Big Sean shared how excited he was with his 7.7 million Instagram followers: “Excited to officially announce that I am now apart of the @PUMA family. I Decided that this was the best path for me creatively, and we’ve been hard at work making sure this first collection is something special.“

As the brand’s new creative collaborator and global ambassador, Big Sean will be working alongside Puma’s team to design an exclusive collection, which is slated for a spring ’18 release. He will also front the next Puma Classics campaign coming out this summer.

In the meantime, Big Sean will be representing the brand by wearing styles from its Classics line, including the Puma Suede and Clyde sneakers. Puma will also be supporting the rapper as a brand sponsor on his summer tour.

Adam Petrick, Puma’s global director for brand marketing said in a statement, “We are thrilled to have Big Sean on board. Anyone who’s followed him throughout his career will know that his talent goes beyond music. His passion for creativity and individuality is very strong. We’ve already kicked off the design process with Sean and we’re glad to see a fusion of his unique style and Puma’s sports heritage coming through.” A new collaborator. A new voice. Welcome the Detroit Don @BigSean to the team. Spring 2018, we’re coming for you.