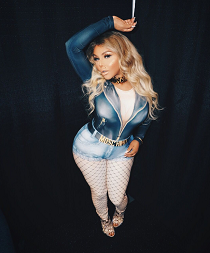 A new Lil Kim clothing line is in the works and it’s long overdue!

The Brooklyn-native is a fashion trendsetter. She started a lot of trends in the late 90s and early 2000s. Kim is good friends with Marc Jacobs. Alexander McQueen used to take her to Milan, Cannes and Paris as his date to Fashion Week.

The stylish Brooklyn-native is readying a clothing line and her fifth studio album. She chatted with Billboard. Below are some excerpts.

First off, congratulations on your own clothing line. As an artist who has been a part of fashion for 20 years, what took you so long?

It’s always been an interest, but you got to understand I came in the industry as a little baby. I was a baby. I was 16 or 17 when I made my first hit record. At that age, you’re not really thinking about [making a fashion line]. Timing is everything. At this point, it’s like I’m really trying to just bloom and blossom as an artist in certain instances, because there was a lot of current events that happened in my life. I’m a very spiritual person. I believe in God so God’s timing is the right timing, period. Enough said.

What is the clothing line called?

I don’t want to get into it, but I’ve always had the name 24/7 Star. That was the first part of my line. When I had my shoe line with Petite Paton, it was called Hollyhood, but we changed it to 24/7 Star. We’ve got different lines inside of the lines that we’re working on, and we might change up a couple of them. We’re working on that right now.

[Proprietor Rose Cordon] is a monumental figure. She’s like a mom to me. When I had my clothing line before, she wanted to put my stuff into the store then, but the company I was with was a small company and they folded. So I had to wait many years later and try to figure it out. That was another reason why it would have happened a long time ago. But like I said, God’s timing is the right timing.

We’re going to take our time with it. I’m not gonna allow the demand from my fans to be rushed. This is like my album. My fans are the awesomest, but they can be the most non-understanding at the same time. I love them, but I’m not gonna allow them to dictate certain things, whether it’s the timing or direction of my album. I think that this album is definitely going to have a happy medium, and that’s all I’m concerned with. I’m a hustler first. Music is my life, music is what I do, music is my livelihood — this is how I make money! At the end of the day, I gotta give my fans certain sounds and music that they like, but they’re also gonna get with the new sounds whether they like it or not. They gon’ get with the new thing, because I’ve always been a trendsetter and I do have a new sound and that sound was stolen from me. This is years in the making of another new sound.

Do you feel that on this project, you are going to tell that story that people wanted to hear?

Yeah, absolutely. I think that this is one of my highly anticipated albums and I want it to be fun. What comes with telling a story is fun. I’m not gonna sit here and just make an album that’s story-telling; you can’t play that in the clubs. When I came out, it was a lot [of songs] like that. I had songs on the album where I’m telling a story and these are some of my fans’ best songs like “Heavenly Father” I can’t do. It’s a different time. Don’t get me wrong and I love my fans, but a lot of my fans, when I came out, some of them were way older than me, some of them were my age and some of them were way younger than me. The ones I think that were older than me, I think they never really grew from that with me. They were tryna keep their childhood with me, and so the ones who haven’t grown with me, I can’t do nothing about that. They gotta grow with me, you know what I mean?

At the end of the day, I’m still gonna do what I’m known for. That’s never gonna stop, because I would not be able to make the album without doing what I’m known for or giving them a piece of Hard Core. I wanna give them that feeling, but I also want to bring them into my world a little bit like I did on The Naked Truth. And you know why a lot of my fans loved The Naked Truth? It’s because I was going to prison at the time and I touched on a lot of things that were happening. I’m not gonna make the same album twice — that doesn’t make sense. I’ve never, for the life of me, understood why fans would think that any artist would make the same album twice. That would not make me a real artist. It’s not realistic. That’s why one of my favorite lines from an artist to me is the Jay Z line when he says, “You want my old sh-t? Buy my old albums.” At the end of the day, he’s not gonna do the same things he did seven years ago. He’s a different person, you know? But he’s gonna remind y’all, I’m pretty sure he’s gonna give certain things. Just like me, I’m gonna remind them of what I did before. So it’ll be a perfect mix, and whichever of my fans don’t understand that — I’m sorry. They got to get left like a lot of my friends who haven’t grown with me. I came up with a lot of friends, and a lot of my friends had to get left because they weren’t growing with me. It’s nothing personal, I love them still with my heart but if my friends aren’t growing, I can’t be held back.

There’s also a possibility you may be doing another type of “Ladies Night” collaboration on this project.

What I was saying was it’s about time for another “Ladies Night” song. Let me explain something to you – I’m a hustler first. The “Ladies Night” record got me a Grammy nomination and several MTV [award] nominations, and we performed the song on MTV during one of the biggest awards moments and my album went double platinum. At the end of the day, I want another one of those. I ain’t thinking about no other bullshit, because like I said, this ain’t what you want when it comes to that because I’m an extremist. Plus, I already handled my business. Everybody else already know, I already put it down. Once that situation came at me, I addressed the person. Like I said, that’s done and over with and they know what it is. That person knows what it is. Me and Remy is cool so I just want these blogs to keep my damn name out the bullshit.

So moving on from that, I would like to have something like that on my new album. Even if I just did records separately with different females, it’s still the unity. I was looking at the footage of me, Cardi and Remy all up there on that stage, and everybody did they thing, everybody held they own. I’m also in the business side of things. I also stepped my game up from when I was a kid in the game and I was not really business-minded. I just was told what to do, so now I’m putting business moves together.

Exactly. I’m independent. I’m not signed to a record company. I do have a situation going on that I can’t really talk about until I can talk about it, but I have a situation going on and it’s kind of a partnership. Again, like I said, it feels good to be in the driver’s seat, be independent and do my thing. It feels really good. At this point, it’s about the artistry. It’s also about the entrepreneurship, the boss moves this time around. At the end of the day, I’m good at certain things behind the scenes as well, so that’s just basically something that I wanted to make good on.

When are you looking to actually drop the album?

I don’t have a specific date, but it’s definitely coming out this year. I have a couple people I want to work with. I’m not gonna tell you who but there’s a few people I want to work with, so I’m just getting those people together and getting them on the album. With me traveling, performing and doing music, it’s kind of hard. Plus I got my baby so I’m just leveling everything now. But I’m going hard.

Head over to Billboard to read the interview in its entirety.