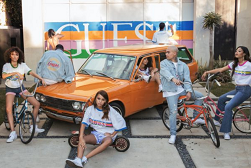 Harlem‘s own A$AP Rocky is one of the most stylish rappers in the game. Literally, he’s designer’s favorite Hip-Hop muse. The style icon is teaming up with Guess on a second capsule collection for its Guess Originals x A$AP Rocky line called “Guess Club,” which hits stores such as Opening Ceremony and Black Market on March 10.

Last year (Feb. 2015), Rocky first teamed up with the denim brand to debut a Guess Originals x A$AP Rocky capsule, based on the company’s archival pieces from the 80s. Pieces from the collection sold out in hours.

While in London, Rocky called WWD and said, “The first collection was so well-received, we had an amazing turnout. People actually understood my reasons for wanting to collaborate on that nostalgic collection. Growing up with an urban hip-hop background, Guess was part of that, in the ‘Menace II Society’ films and in my household. It was my own twist on archival pieces.”

The new collection, he said, is “all about my imagination. I’m a man-child, so the collaboration represents colorful, fun clothes, like a clubhouse collection. Like that hat that says, ‘Password’ on it. It’s all tracking back to my childhood: Saturday morning and early afternoon with cereal and cartoons, toys, records and eight tracks, Toys ‘R’ Us. I want to be a kid forever.”

Pieces include classic logo tee-shirts, color-blocked denim, oversized jackets and high- and low-rise bell-bottom jeans. The women’s and men’s apparel ranges from $49 to $198 retail, plus a unisex $39 hat.

Hannah Sider shot the campaign in Los Angeles. The campaign was directed by Rocky’s creative group AWGE, and features Rocky himself and a posse of models chilling in said clubhouse, and rollerskating skateboarding in the street.