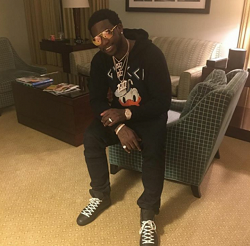 In the photo above, rapper Gucci Mane had on a $1,450 Gucci Sweatshirt With Donald Duck Appliqué, which he styled with a pair of black denim jeans and sneakers.

Donald Duck makes an appearance on several of Gucci‘s Spring/Summer 2017 looks. This sweatshirt has an embroidered appliqué featuring the cartoon character’s face along with embroidered Gucci and “Σέραπις” appliqués-a reference to the Greco-Egyptian deity Serapis.

The hoodie is available at Gucci.

In the pic below, he had on a $1,870 Gucci Jersey Bomber Jacket With Panther.

The bomber jacket continues to be an important silhouette in Alessandro Michele‘s collections. Made from a textured stitch jersey fabric, the jacket features the Sylvie Web in white, red and blue and embroidered panther appliqué at the chest.

This bomber jacket is available at Gucci.