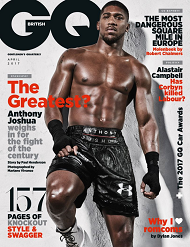 This issue was lensed by photographer Mariano Vivanco. Below are some excerpts:

Anthony Joshua on what will happen in his upcoming fight with Wladimir Klitschko:

“I think I will knock Klitschko out. I’m not superstitious about it, but I have a feeling that it will happen in a slightly unexpected way. It will be something like a counterpunch that will finish it. It won’t be quick… It will take time because he is so experienced and he isn’t easy to hit. But I will find my opportunity and I will take it.”

We ask Anthony Joshua what it feels like to knock a man out:

“Oh… It’s amazing. I just love it, man. And the thing with me is that there is no remorse. When I hurt someone it annoys me when they [the referees] don’t let me finish them. Honestly! Because that is my job.”

On rumours that whilst sparring Anthony Joshua has been knocked out by amateur Lawrence Okolie and badly rocked by 19-year-old heavyweight prospect Daniel Dubois:

“In my code, the fighters’ code, it is not good to talk about sparring. If someone invites you to spar, they are inviting you into their secret camp, their inner circle. So I don’t think it is fair to betray that trust by talking about it… I don’t go in there to prove a point. If anything, I like to take more punishment because that is how I learn about myself. What is the point of going into sparring and beating everyone up, when in a real fight the tables might turn and I don’t know how to handle it? I want to practice what it feels like to be hit and hurt. You have to learn how to defend, to be slick when the punches are raining down.”