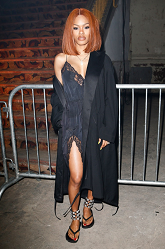 Teyana Taylor recently went back to her stomping grounds, (Harlem, USA) for the Alexander Wang‘s Fall 2017 Runway Show. Wang‘s presentation was held at the RKO Hamilton Theater on the corner of Broadway and 146th Street.

The G.O.O.D Music recording artist grew up less than two blocks from where the show took place.

The stunning Harlem native and model talked to Vogue.com backstage, she was blown away by Wang’s sleek, all-black collection and its cohesion with Harlem’s bold spirit. For the show, she was outfitted in a boudoir-inspired ensemble of a black satin slip with a robe coat slung over shoulders from the collection.

She told the publication how Harlem inspired her own style and set her path in fashion.

As a Harlem girl, how does it feel to be back in your old neighborhood tonight for fashion week?

Freaking amazing! I didn’t even know it was going to be in Harlem. It’s so crazy because my man’s salon, Jerry’s Den, is like a block over on 145th and I was just at the salon today. I said, “I gotta jet down to the [recording] studio and get my makeup done!” and they were like, “Well, we’re going back uptown!” So I got all the way downtown to come all the way back uptown, but it’s all dope. I got here a little early, stopped at the Chinese place, ordered some chicken wings, and then I came down the block and it was lit!

It is. I asked the guy working at the Chinese spot if he was coming to show and he got mad at me because he was like, “Why are you filming me?” And I was like, “This isn’t the Wang show?!” But I told him not to miss it, so I’m sure he’s in here somewhere.

Probably. How do you think that the neighborhood influenced your personal style when you were growing up?

I think Harlem is a big runway and I enjoy every bit of it. We have that natural swag, attitude—it oozes out of us.

What were some of your favorite stores in Harlem growing up?

When I was growing up you had Mart 125; they’re closed now but they were over on 125th. You had B-Jay’s—I used to get all my kicks there. It was right here at 145th and Broadway, actually. I was into a little bit of everything—I was everywhere!

How do you think Harlem and Alexander Wang vibe?

I was already super in love with [Alexander Wang], but more so now because he’s in the middle of Harlem, getting it poppin’, and I think he took Fashion Week to the next level. When’s the last time someone came to Harlem for a full-blown fashion show?! This was a full-blown show, showing pieces—he didn’t even shoot the lookbook yet. He’s like, “I’m showing it straight out the gate in Harlem and then I’m going to shoot the lookbook!”

I hope you’re in it!

I know you were in the recording studio today, but do you want to get into fashion design?

Without a doubt. I have to take things one at a time. Once this album is out . . . it’s really going to be lit, and people want the music, so I’m going to give it to them first.

How are you staying energized during Fashion Week? It’s so tiring!

You get tired, but then you come to the show, you see the pieces, and you get re-energized.

What’s the one place people should visit the next time they’re in Harlem?

Lighthouse! It’s a new fish market, black-owned, and the seasoning is on point. They’re right on 8th Avenue and 132nd. I love Chinese food too, but they close at 9! They don’t stay open late enough.