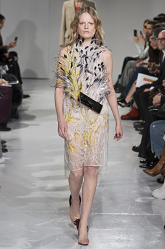 All eyes were on Raf Simons for his debut Calvin Klein collection at New York Fashion Week. It was one of the most anticipated shows of this season.

Six months after taking the helm at Calvin Klein (see it here), releasing his first ad campaign for the house (see it here), announcing a newly created made-to-measure clothing and accessories services, called Calvin Klein By Appointment (see it here) and weeks of speculations, yesterday Friday (Feb. 10) Simons presented his Calvin Klein Fall 2017 show at the brand’s West 39th Street headquarters in the former Garment District before a small crowd of fashion insiders and a group of celebrities.

Simons show proved that he could re-invent the iconic American label. He raised the bar with his debut collection. During the show, he made a political statement: beginning and ending the show with David Bowie’s “This Is Not America”.

Yet his inspiration was all about the U.S. “American youth,” he said backstage post-show. “I keep thinking of all the beauty here; you have to focus on that now. And I think American youth is the future for this country. It’s about gathering. It’s intelligent, honest, powerful, beautiful. It sounds almost simplistic, maybe.”

Both women’s and men’s collections were shown on the runway — unisex designs infused with both pale, muted colors and bolder tones. Plastic fabric covered many looks–like plastic coats worn over plaids, or plastic feathered white dresses sprinkled with blue, yellow, and red.

Multi-toned, near-nude sheer tops for men and women were like a second skin, accented with loose knitwear sleeves or worn under suits and cutout dresses.

Other looks echoed varying iterations for men and women one after the other — like denim on denim, or a male model’s pale-gray suit over a sheer top, followed by the same look for women.