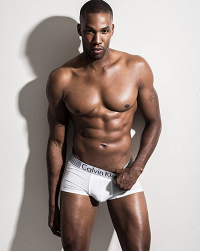 Where Are You From: Fort Lauderdale/Miami, Florida.

Career Goals: To be featured on National Billboards, major campaign for Calvin Klein or Fashion Brand, make an appearance on Good Morning America and OWN telling my inspiring story, featured on the cover and or spread of Men’s Health, GQ and Vogue Magazine, book a reoccurring role on a major cable network for a TV series, sign with NEXT models Miami, Wilhelmina, Slu and or Soul Artist management, becoming an A list actor.

What inspired you to get into modeling: I always had a love for fashion since I was a younger kid. My mom was very big in matching up our clothes and made sure my siblings and I left our house looking presentable. She led by example each and everyday. After playing college football, arena football, and being short listed for the Cleveland Browns, Seattle Seahawks and Carolina Panthers, I was drafted to the AAFL (All American Football league) team Tennessee. Due to financial obligations the league folded before training camp. A good friend of mine suggested that I work for Enterprise Rent A Car and from there, I met three modeling/ talent agents in one day that suggested that I should go into modeling, from there I took a leap. I competed in a male beauty pageant, and was crowned the face of the W hotel bliss spa of Fort Lauderdale.

What modeling agency would you like to sign too: NEXT models Miami, Wilhelmina, Slu, Soul Artist Management, and to advance in my acting career Gersh Talent Agency.

Have any agencies reached out to you yet: Yes, I was scouted on Instagram by former IMG/ Head Model Scout/ Agent Ward Cottrell. However, I am signed with Cover Models South Africa and working out of Cape Town currently.

What are you doing to get scouted by other agencies: Revamping my portfolio, developing my craft, taking acting courses, attending social network events and posting more on social media.

What models are you inspired by: Tyson Beckford, Tyrese Gibson, Boris Kodjoe, and Shemar Moore.

Which brand would you really like to model for: Calvin Klein, Nike, and Adidas.

Any publications you would like to be featured in: Essence, Ebony, GQ, Men’s Health, Sports Illustrated, and Vogue.

Do you prefer print or runway modeling: Print, although I am open to runway.

Favorite modeling experience so far: Becoming an international model and working in the mother land, South Africa, although there are several memorable experiences in my career. One being featured in HBO Ballers, featured in the 2015 Ms. Universe Pageant, runway model for 2016 Matrix Destination, model for Runwade Foundation (Dwyane Wade Basketball Player), and commercial with Olympic World Record Medalist Usain Bolt.

What are some of your favorite shopping stores in your hometown: Sawgrass Mills, Aventura Mall, Dolphin Mall, and Broward Mall.

A day in your life would consist of: Waking up at 5am, inspirational videos, going to work out, casting and or bookings.

Do you have any favorite online stores/e-Commerce: Amazon, EBay, and Jet South Africa.

Your Fashion Influences Are: Classic/GQ style

Do you have a favorite fashion memory: Yes, wearing a lime green stripe suit to the AAFL (All American Football League) draft.

What music are you currently listening too: Lil ‘Wayne, Tupac, Drake, and Calvin Harris.

Favorite movies, tv shows: Friday After Next, Power, and Ballers.

Currently obsessed with: Working out and inspiring others to be fit determined and goal driven.

What projects are you currently working on: A casting for Men’s Health, and a go see for GQ in South Africa.

What’s next for you: Taking my career one day at a time and as I’ve learned life is about progression and if you’re not moving forward then you are going backwards. I have a burning desire and obsession for success. I feel that my story is meant to be heard and I am using my platform to do just that. I hope that I can inspire and motivate as many people as possible. I believe in the saying, “It’s not where you come from but where you’re going.”