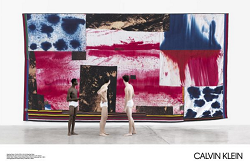 Raf Simons is our fashion God! He’s winning our hearts.

Raf Simons took the helm at Calvin Klein last summer (see it here). We recently reported that the brand will launch made-to-measure clothing and accessories services at Calvin Klein on April 1. The range, called Calvin Klein By Appointment, pledges to offer unique pieces, previously only made for celebrity clientele, to CK fans looking for a special slice of Simons’s creativity for themselves (see it here). We also announced that the highly anticipated Calvin Klein Fall 2017 runway show will take place Feb. 10 at 10 a.m. during New York Fashion Week. This will be Simons first collection for the label.  The show will feature Calvin Klein’s men’s and women’s ready-to-wear and accessories (see it here).

The moment we’ve been patiently waiting for has arrived. Raf Simons just unveiled his first campaign for Calvin Klein. The Spring 2017 campaign for the iconic American label is titled, “American Classics” and was photographed by Willy Vanderperre.

“It’s a celebration of Calvin Klein’s iconic underwear and jeans; acknowledging their status as Pop and showing them in the world of art,” said Simons in a statement via Instagram.

The brand also notes that Prince‘s text-heavy artworks tie in nicely with the new Calvin Klein logo adorning the models’ briefs. “Not that we’d confuse the branding with the wearer’s identity, as Lorraine did with Marty McFly,” says the label’s website.