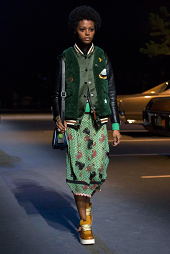 Changes are coming to Coach this fashion week!

The American brand will move its men’s show from London, to New York, and present it in tandem with women’s collection — following a two-show-a-year model going forward.

In the past, the brand staged four shows a year — two each for men and women.

A Coach spokesperson did note that the forthcoming show will feature a “greater proportion” of women’s looks.

Going forward, pre-fall and resort collections will be shown with look books and editor appointments.