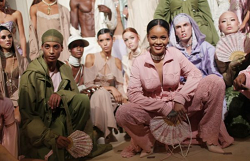 Rihanna is Headed To The City Of Light Again; Will Show Her Puma Collection At Paris Fashion Week Rihanna is headed to the City of Light again!

The multi-platinum singer and Bajan fashion designer will show her third Fenty Puma by Rihanna Fall 2017 collection in the French capital.

Her first collection for Fall 2016 was shown in New York at 23 Wall Street (see it here). The date and venue for the upcoming show have not been disclosed, but supposedly it will involve an after party.

According to industry sources, “Rihanna has been working with a different designer each season, though they’re not public collaborations. For example, Adam Selman, who worked with her on her River Island Collection in 2013 and has done much custom work for her, was backstage at her spring 2017 show. Its girly/sporty/street look was very much in line with his aesthetic. It couldn’t be learned who she’s been consulting with for the next collection.”