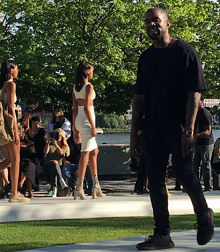 The show has been moved up by two hours to avoid conflict with another designer.

Earlier in the week, DM Fashion Book officially confirmed that Kanye West will present his Yeezy Season 5 at New York Fashion Week. We originally reported that the show will take place on Wednesday, Feb. 15 at 5 p.m, and is in partnership with Adidas (see it here). However, we mistakenly reported the wrong time slot and we apologize.

West‘s source told Page Six, “Information about the show leaked before anything was confirmed — that time slot was never confirmed. It’s all being worked out, and will be at a time that doesn’t conflict with anyone.”

The original 5 p.m. time slot caused a lot of backlash from the CFDA because it was the same time as high-end brand Marchesa.

Yesterday, Thursday (Feb. 2), we reported that “West once again, did not get approval for his New York Fashion Week time slot, and the CFDA President and CEO Steven Kolb doesn’t think the industry should tolerate it. The problem is that West tends to pick his time slot with little-to-no consideration for who was already on the schedule: This time, he picked the same time as Marchesa, also a time slot between Anna Sui and Thom Browne. West did not consult the CFDA about his decision to stage his show opposite Marchesa and the CFDA is not happy about it” (see it here).

We could now confirm that West‘s show has been rescheduled. He will show during the 3 p.m. time slot, on Wednesday, Feb. 15. The show’s location is still Pier 59 Studios.

Kolb says, “Kanye called me personally to let me know that he had no intention of showing on top of another designer, and was unaware that there was a conflict. He explained that once he realized Marchesa was in the time slot, he immediately looked at alternative options. The CFDA appreciates Kanye’s outreach and effort, and we look forward to working with him far in advance to integrate Yeezy into the schedule in seasons to come.”