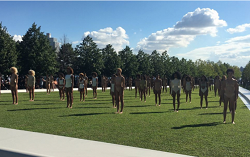 We recently confirmed that Kanye West will present his Yeezy Season 5 at New York Fashion Week. The show will take place on Wednesday, Feb. 15 at 5 p.m, and is in partnership with Adidas (see it here).

However, not everyone is excited because West once again, did not get approval for his New York Fashion Week time slot, and the CFDA President and CEO Steven Kolb doesn’t think the industry should tolerate it.

The problem is that West tends to pick his time slot with little-to-no consideration for who was already on the schedule: This time, he picked the same time as Marchesa, also a time slot between Anna Sui and Thom Browne.

West did not consult the CFDA about his decision to stage his show opposite Marchesa and the CFDA is not happy about it.

Steven Kolb told WWD: “Once again, CFDA was not approached or consulted about the possibility of Kanye West showing on the official New York Fashion Week schedule. As the scheduler of the week, the CFDA works with more than 300 brands to identify appropriate times for them to show their collections and avoid scheduling conflicts. Not going through the proper channels is disruptive to the whole week and unfair to designers who have secured spots through the formal procedure.”

“This bad behavior is not acceptable to the CFDA and should not be tolerated by the industry. Because of this, the CFDA will not list Kanye West on the official schedule. However, the CFDA is more than willing to work with Kanye on securing an available time slot.” ← Previous Story Zac Posen Is Showing His 15th Anniversary Collection During NYFW, But Not On The Runway
Next Story → Stefan Larsson Is Leaving Ralph Lauren Corp.