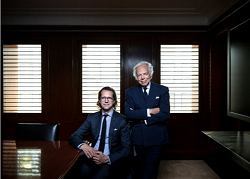 The fashion shake-up around the world continues. Earlier today Thursday (Feb. 2), DM Fashion Book announced that after 12 years at the helm of Givenchy, artistic director Riccardo Tisci has exited the French house and is rumored to be going to Versace (see it here).

We could now report that Stefan Larsson is leaving Ralph Lauren Corp.

Let’s back track for a second: Back in September of 2015, we reported that “for the first time since the house launched almost 50 years ago, Ralph Lauren will see a new CEO, and someone other than Ralph Lauren himself. The American designer built his fashion empire in 1967“. At that time, Lauren appointed Stefan Larsson to the position of chief executive officer (see it here).

14 months later, Larsson is leaving the iconic American house. May 1 will be his last day.

According to WWD, “The company, which will conduct a search for a new CEO, said it will continue to execute the Way Forward Plan laid out in June, now a hallmark of Larsson’s short tenure. Investors were rattled, sending shares of the company down 10.3 percent to $78.39 in midday trading.”

“Chief financial officer Jane Nielsen will lead the execution of the plan until the CEO search is completed.”

Ralph Lauren, executive chairman and chief creative officer, said, “Stefan and I share a love and respect for the DNA of this great brand, and we both recognize the need to evolve. However, we have found that we have different views on how to evolve the creative and consumer-facing parts of the business. After many conversations with one another, and our board of directors, we have agreed to part ways. I am grateful for what Stefan has contributed during his time with us, setting us in the right direction with the Way Forward Plan.”

The executive chairman said the company has “built a strong foundation for future growth, including strengthening our team, refocusing our brands, evolving our products and our marketing, improving our operations and reducing our costs.”

Larsson said that the Way Forward Plan is “on track.” He added, “Ralph will always be an inspiration to me, and I am grateful to have had this experience.”

“The news of Larsson’s departure was made on the same day the company posted third-quarter results for the period ended Dec. 31. Net income fell 37.4 percent to $82 million, or 98 cents a diluted share, from $131 million, or $1.54, a year ago. Net revenues were down 11.9 percent to $1.71 billion from $1.95 billion. By segment, both wholesale and retail net sales saw declines.”

“The company said wholesale net sales fell 26 percent to $582 million, while retail net sales slipped 2.2 percent to $1.1 billion. Consolidated comparable-store sales fell 5 percent, but were down 4 percent on a constant currency basis. Both components contributed to a net sales decrease of 12.1 percent to $1.67 billion for the quarter. The balance of revenues came from licensing income.”

“The company also closed another 12 underperforming stores during the third quarter.”