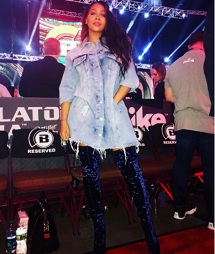 Lala Anthony Inks Production Partnership With ITV America; Plus Rapper Nas Is Getting A Pilot Based On His Life Major congrats goes out to Lala Anthony. It was just reported that the entrepreneuress is expanding her relationship with reality producer ITV America.

The actress, author, producer and fashionista has signed an exclusive production partnership with ITVA to create and produce projects in the urban, music and pop culture space via her LaLaLand label, under the ITV America banner.

Back in 2016, we reported that Lala and award-winning music producer Timbaland were teaming up with Leftfield Pictures (Pawn Stars) to develop a Hip-Hop docuseries. The project will focus on Jeff Janvier and Session Cruz’s Face Time Agency, the industry’s premiere casting agency for booking music video and hip-hop fashion models, with clients including Drake, Kanye West and Robin Thicke (see it here).

They’re also in development on several other projects that include documentaries and scripted series, as well as true-crime and live-event series.

“I’m beyond excited to be partnering with Leftfield and ITV America,” Anthony said. “I have a long history of working with David George, and I truly feel this company will help bring my ideas to life.”

Added Leftfield Entertainment CEO David George: “I’ve known La La a long time, as a friend and colleague, and she is one of the hardest-working, most driven and connected people in our business. We’re thrilled to be deepening our relationship with La La and to take her inspiring voice and entrepreneurial fierceness to multiple genres and platforms.”

Anthony’s televisoon credits include the hit Starz series Power, BET’s The New Edition Story and A&E’s Unforgettable. Her film credits include Think Like a Man, Think Like a Man Too, Baggage Claim, Chi-Raq and the upcoming Earnest Dickerson film Double Play. Anthony is also a twice-published, New York Times best-selling author and recently made her Broadway producing debut with the Tony-nominated play Eclipsed, which featured Broadway’s first all-female, all-black cast (see it here).

Anthony is repped by UTA and Untitled. In other television news iconic New York rapper Nas is getting a series based off his life, which will debut on BET.

According to Deadline, “BET has given the green light to another music-infused period scripted project based on the story of a famous performer. The network has ordered a pilot for Street Dreams, an hourlong series from Rush creator Jonathan Levine. It is executive produced by rapper Nas on whose life the project is based.”

“Set against the backdrop of a turbulent New York City in the early ’90s, Street Dreams, named after Nas’ breakout 1996 hit song, was originally set at the now-defunct XBox Entertainment Studios as a half-hour comedy two years ago. Described as a show about music, family and the trials and tribulations of the rap game, it tracks the ascent of Nas, a young man from the Queensbridge projects who will go on to become a famous rapper, as he evolves from young man to crack dealer to rapper to adult.”

“Levine, who wrote the script and will direct the pilot, also grew up in New York, spending his formative years in the 1990s. New York at the time was the backdrop for his coming-of-age feature The Wackness, winner of the Audience Award at the 2008 Sundance Film Festival.”

“Deals are still being finalized, but Levine is expected to executive produce with Nas — real name Nasir bin Olu Dara Jones — as well as indie film producer Jamie Patricof and Lynette Howell (The Place Beyond the Pines) of Electric City Entertainment and Nas’ manager Anthony Saleh.”