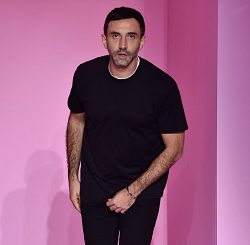 We recently reported that Tisci was rumored to be leaving his artistic director position at Givenchy.

DM Fashion Book could now officially confirm that Tisci has exited the French house, after 12 years at the helm. His last collections were the Fall/Winter 2017 Men’s and Fall 2017 Couture, which was shown last month (see it here).

Sources said the parting as mutual and amicable, the separation effective Jan. 31, following the expiration of his latest employment agreement.

The Italian fashion designer is credited with resurrecting Givenchy with his dark, sensual and subversive collections. He helped rejuvenate the legacy of the brand.

During his time at Givenchy, Tisci revitalized the house’s couture business, as well as breathing much-needed life into its product categories, leading the creative direction for its womenswear, menswear and accessories.

“The chapter Riccardo Tisci has written with the house of Givenchy over the last 12 years represents an incredible vision to sustain its continuous success, and I would like to warmly thank him for his core contribution to the house’s development,” said Bernard Arnault, chairman and chief executive officer of LVMH in a statement.

“I have very special affection for the House of Givenchy and its beautiful teams,” Tisci added. “I want to thank the LVMH group and Monsieur Bernard Arnault for giving me the platform to express my creativity over the years. I now wish to focus on my personal interests and passions.”

Last month, we exclusively reported that Italian luxury house Versace is in talks with Riccardo Tisci. Versace has made overtures to Tisci and held discussions in recent months (see it here).

Tisci studied in Italy at the Design Istituto d’Arte Applicata in Cantu until the age of 17, and then graduated from London‘s Central Saint Martins Academy in 1999.

We look forward to the next chapter of Tisci storied fashion career.