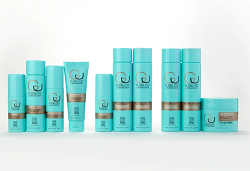 Actress Gabrielle Union, who is currently starring in the BET drama Being Mary Jane could now add “beauty” to her forever growing resume.

What’s next for the actress? Union is following in the footsteps of Jessica Alba, cofounder of Honest Co.; Drew Barrymore, Flower Beauty founder, creative director and co-owner, and Jennifer Aniston, a former Living Proof stakeholder, in building a beauty brand from the bottom.

In the past, Union was asked numerous times to be the famous face fronting a hair-care brand, but she was never completely sold on any brand’s full assortment and didn’t want to be attached to one she didn’t wholly endorse for something as important as her hair, which she’d struggled since childhood to embrace. So, she created her own brand, Flawless by Gabrielle Union, that will be launched at the Ulta Beauty on April 16.

“For me — having skin in the game — it deepens the connection,” said Union, speaking to WWD earlier this month from Milk Studios in Los Angeles, where she was being photographed for Flawless. “It makes me work a lot harder than if I was just a hired gun. I want to make sure that it’s right for me, for my family, for my friends, and for every person with textured hair. I want to have a seat at the table, and part of that is having ownership.”

Initially making its debut on March 1 on the web site Flawlesshair.com, Flawless’ range contains 10 products priced from $19 to $29: Moisturizing Shampoo, Moisturizing Conditioner, Smoothing Shampoo, Smoothing Conditioner, Hair Masque, Blow Dry Cream, Hair Protection Spray, Shine Spray, Oil Treatment and Edge Control Gel. The packaging is decorated in teal, gold and black, and marked by a logo with an intertwined G and U meant to evoke designer fashion labels. Industry sources estimate the brand will generate as much as $6 million in first-year retail sales.

Andy Rah, vice president of global marketing at Flawless, said, “You can cocktail the products altogether. They’re meant to be interchangeable and versatile to achieve looks without having to have 30 products.”

Union asserted, “I want women with textured hair to have great hair days.” In the past, she suffered to attain those joyful days and doesn’t believe that should have to be the case. “I went through a phase where I would leave my relaxer on so long, thinking the longer I leave this relaxer on, the straighter it’s going to be,” she recalled. “Cut to lesions, like open wounds in my scalp, trying to chase something that was unrealistic, and eventually probably in my mid- to late-20s I decided to give up my relaxer, and I went natural. By natural I mean underneath the weaves, extensions, clips and the hair color was my natural hair — thriving.”