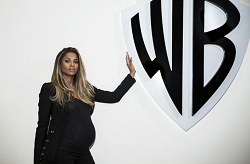 On Friday (January 27), it was announced that R&B/Pop singer turned fashion icon and super model Ciara signed a new deal with Warner Bros. Records. The Atlanta-native ended her contractual agreement with Epic Records some time last year. Cici celebrated the news via Instagram.

“Warner Brothers Records!!! Lets Get It! Proud to announce and honored to join the family! To all my Ladies out there…this is truly a time where we can do anything, be anything we want, & Love to the fullest while being loved in return.. there is No Limit! Dreams really do come true! I’m supercharged to make the World Dance again!”

Ciara brings an imposing resume to her new label. Her career started over 13-years ago. She sold more than 23 million albums and 16 million singles including Hot 100 No. 1 “Goodies” and the top 10 hits “Oh,” “1, 2 Step,” “Get Up” and “Love Sex Magic.” Her last album, Jackie was released in 2015 and produced the platinum-selling single, “I Bet“. She also won a Grammy Award.

She inked a deal with Friends At Work, a new management company founded by Ty Stiklorius, who previously worked as co-president at the Atom Factory, famously known for its affiliation with Hollywood stars like Lady Gaga. FAW is already the home for singers including Alicia Keys and John Legend.

Outside of music, Cici appeared in multiple films and television shows, most recently the first season of NBC‘s celebrity variety show I Can Do That!.

In the fashion world, Ciara signed an exclusive modeling contract with IMG Models (see it here) and last October, we reported that the beauty muse has been tapped as Revlon‘s newest global ambassador (see it here).

Cici is a muse of former Roberto Cavalli’s creative director (Peter Dundas). He designed her wedding dress (see it here), she was also the face of Roberto Cavalli’s Fall/Winter 2015/16 Campaign, was the first American ambassador to Topshop (see it here), was in the latest campaign for Keds (see it here), is a long-time muse for Givenchy, cultivating close friendships with designer Riccardo Tisci, as well as with Ralph Lauren and she most recently covered the February 2017 issue of Cosmopolitan South Africa (see it here).

Currently, Ciara is celebrating some other big news. The singer is expecting her second child and first with husband Russell Wilson (see it here).