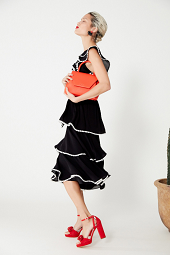 According to reports, New York – based multinational luxury fashion company Coach and American fashion brand and designer Michael Kors are interested in purchasing the American fashion design house, which was founded by Kate Spade and Andy Spade in 1993.

The two companies’ broads are conversing the feasibility of going ahead with a bid.

BoF reports, “Luxury handbag maker Kate Spade & Co. is attracting interest from high-end retailers including Coach Inc. and Michael Kors Holdings Ltd. as it pursues a sale,” according to people familiar with the matter.

“The two companies are speaking to their boards about the feasibility of going ahead with a bid, said the people, who asked not to be identified because the discussions are private. Kate Spade has also drawn interest from other luxury-brand companies outside of the US, one of the people said.”

Discussions are ongoing and no final decisions have been made as of yet, the people said.

“New York-based Kate Spade planned to kick off a formal auction process this month and has drawn interest from six potential bidders, a person familiar with the matter said last month. Hedge fund Caerus Investors pushed the company in November to find an acquirer that could help it improve its profit margins.”

“Caerus, which didn’t disclose the size of its stake, sent a letter to Chairman Nancy Karch in November saying its profit margins were lower than peers, destroying value for shareholders. Shares have declined almost 40 percent in the last three years, giving Kate Spade a market value of about $2.3 billion“.

Coach and Michael Kors are two of Kate Spade‘s biggest competitors. The company has sought to become a lifestyle brand, selling everything from clothes to home goods.