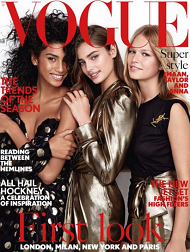 British Vogue‘s editor-in-chief, Alexandra Shulman is exiting the magazine, after 25 years at the helm. She will leave her role this summer.

“Although I have had months to acclimatise to the idea of leaving Vogue, it hasn’t made the moment of announcing this any less sad,” Shulman said this morning. “I have been incredibly privileged to have been able to look after such a great magazine for so long and even more to have worked with so many people over those years who have made the experience so interesting and rich.”

“It was difficult to decide to leave but 25 years is a very long time and I am tremendously excited that I will now look forward into a different future,” Shulman added, “but I know that nothing will be quite like the years I have spent at Vogue. Nicholas Coleridge and Jonathan Newhouse have given me the space to edit this important magazine in exactly the way I wanted to and for that, and of course the opportunity in the first place I am tremendously grateful. I will miss the people who surround me daily at Vogue House more than I can say and I am very pleased that I will be here for several months more concentrating on the next issues and new initiatives for this magazine that I love.”

“Alex has been the longest serving and most successful editor of Vogue in its 100-year history,” Nicholas Coleridge, managing director of Condé Nast Britain, said today. “She has edited the title for a quarter of its existence, through its period of highest ever circulation, and its simultaneous transformation into a global digital brand. She has been the towering figure of the British fashion press throughout her tenure: a superb journalist and editor, who understands and exemplifies every quality. Imaginative, hard-working, perceptive and a brilliant leader, Alex is also a valued friend to so many of us. It is impossible to sufficiently express the contribution she has made to Vogue, to Condé Nast and to the British fashion industry.”

Shulman began her journalism career at Over-21 magazine, before joining Tatler in 1982 and working her way up to features editor over the next five years. In 1987, she joined the Sunday Telegraph as editor of the women’s pages and then moved to deputy edit their current affairs/photo reportage based tabloid. She came to Vogue as features editor in 1988, before joining GQ as editor in February 1990. She took the helm at British Vogue in 1992 and since then has steered the magazine through a period of great change.

An announcement regarding a successor has yet to be named. Stay tuned as this story develops!