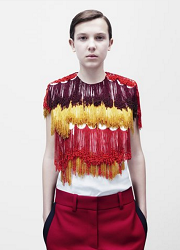 The range, called Calvin Klein By Appointment, pledges to offer unique pieces, previously only made for celebrity clientele, to CK fans looking for a special slice of Simons’s creativity for themselves. “Calvin Klein is not only about iconic underwear and jeans—it’s about so much more,” said Simons in a release.

The news broke via the brand’s social media pages and it was posted on Calvin Klein‘s website. A collection of 14 distinct looks presented photographically, in ‘real life’ media, was photographed by Willy Vanderperre and styled by Olivier Rizzo.

The imagery, meant to reflect the variety of American women and the trends of the ’20s through today. Calvin Klein touched on the movement obliquely. “Calvin Klein By Appointment 1-14 [the name of the campaign] is very much about celebrating the American woman and American fashion,” said Simons.

Creative director Pieter Mulier, who worked as Simons’s right hand at Dior, echoed the designer’s sentiments. “It is driven by character; it’s about a woman feeling empowered and being her own person in what she wears.”