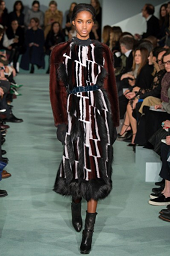 Designers Laura Kim and Fernando Garcia, who are also co-creative directors of both Monse and Oscar de le Renta, will debut their Fall 2017 collections for the brands together one after the other, showing Monse first – during New York Fashion Week at 6:30 p.m. on Monday, February 13. The event will be held at IMG‘s Skylight Clarkson Square venue with a set designed by New York-based Stefan Beckman Studio.

The venue is a shocking choice for Oscar de la Renta, because the brand typically shows at a more buttoned-up location such as the Morgan Library, the Park Avenue Armory or in its own offices.

BoF reports “But the decision to show the collections consecutively, with no break, is truly unorthodox“.

“For one, it makes it that much harder for the brands to sit apart in the marketplace. It also puts more pressure on the design team to have both collections ready on the same day.”

“But Garcia argues it’s easier — and more cost-effective — to stage one event than two, while also allowing the designers to show editors and buyers how the two labels are distinct yet complement each other. (While Oscar de la Renta’s aesthetic will certainly evolve under Kim and Garcia’s watch, it seems sure to remain the dressed-up antidote to Monse’s flashier, rebellious quality). There will also be a “reveal factor” before the first Oscar de la Renta look hits the catwalk in order to clearly delineate the lines, and to underscore the elder brand’s gravity.”

“We wanted to attack it head on: Can we do two different collections that have an identity on their own and be brave enough to show them together?” Garcia said. “Having them be consecutive does not mean that there is necessarily a blending of the ideas. There’s going to be different styling for each show, and it’s going to be very apparent where the [change] happens. The clothes are very different.”

According to Oscar de la Renta chief executive Alex Bolen, the thinking was driven not only by an intention to shake up the increasingly staid runway-show format, but also to convey that the two labels are part of the same brand family. “We talk about brands DNAs, and I think that, on some level, if Fernando is part of the Monse DNA and part of the Oscar DNA, it’s impossible for them to be totally separate,” he said. “And guess what? I don’t think they need to be totally separate. It’s going to be a happy day for me when I see a real customer with an Oscar blouse and a Monse skirt.”

← Previous Story Is Givenchy’s Riccardo Tisci Headed To Versace?
Next Story → End Of An Era? BCBG Max Azria To Shutter Stores And Restructure As “Online Shift”