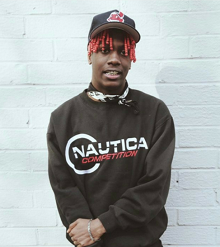 We could now add “designer” to Lil Yachty‘s resume. The “1Night” rapper was just named a Creative Designer at Nautica.

The music artist will be the brand’s creative designer for 2017. The exciting news comes a few months after Yachty fronted the Nautcia for Urban Outfitter campaign (see it here).

In the role, the rapper will design capsule collections and appear in digital and social media advertising campaigns.

The Atlanta-native was an enthusiast who regularly wore vintage styles from Nautica, which connected with his affinity for all things nautical. He’s a part of a collective of artists who call themselves “The Sailing Team” and his stage name comes from “The Yacht Club,” a name he and his group of friends created in high school.

“Nautica is like a part of me,” said Lil Yachty “It’s for kids, sailors, grown men and cool people.  The designs — the old designs, the new designs, I think it’s dope. There’s not really much out there like Nautica.”

Nautica on also recently released a limited-edition collection of pieces curated by Lil Yachty that included re-releases of vintage logo tee-shirts and the brand’s popular pullover fleeces in addition to basics such as striped T-shirts and cashmere crew sweaters.

“We are excited to be collaborating with Lil Yachty this year,” said Karen Murray, president of Nautica. “He is much more than just a music artist. He is a creative soul. His innate passion and affinity for the brand, fabulous taste level and the way he looks in our clothes, make him the perfect partner for the Nautica brand.”

Yachty is doing a great job expanding his brand outside of music and into fashion and other entities. Last year, he appeared in a Sprite commercial alongside NBA champion LeBron James. He also starred in Alexander Wang‘s Spring/Summer 2017 campaign (see it here), appeared in New York Times, SSENSE and W magazine.