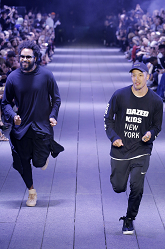 Public School Will Return To The NYFW Calendar Public School‘s Dao-Yi Chow & Maxwell Osborne are back in the news. In the beginning of this month, we reported that the former DKNY creative directors stepped down from their position at the American based brand, after one year and eight months (see it here).

In April, we reported that “Chow and Osborne will combine men’s and women’s collections. The brand announced that it would deviate from the fashion industry’s standard Fall/Winter and Spring/Summer show schedule starting in June 2016. The New York-based brand will now show men’s and women’s collections together twice a year. The collections will be shown in December and June and will be called Collection 1 (pre-spring and spring) and Collection 2 (pre-fall and fall)” see it here.

Obviously, the design duo had a change of heart. In a recent interview with Vogue.com‘s Nicole Phelps, Public School says they’re returning to their slot on the official New York Fashion Week calendar, February 12 at 11:00 a.m. — “a slot we’ve always loved. That’s the plan. Men’s and women’s,” says Osbourne. He also said, “One of the reasons we moved Public School off calendar is because at the end of a show it’s emotional. You put a lot of effort into it, and to do it again within a couple of days and be emotional again, it’s a lot.”

Public School also has plans to open a store “in the future,” says Osbourne. Chow added, “We’re participating in this Retail Lab that the CFDA and Cadillac have put together in January. They select x amount of designers and give them the [Cadillac House] space for three months. We’re going to have a secret not-so-secret pop-up in Paris this summer for our new Jordan and Nike collaboration. Retail has always been a passion of ours, and that was the great thing about DKNY. We had such a major hand in redesigning the New York store and learned so much about that part, we’re eager to take that info and put it back to Public School.”

Head over to Vogue.com to read the interview in its entirety.