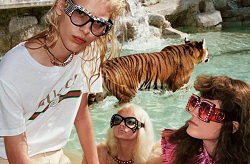 Gucci‘s creative director Alessandro Michele released the campaign for the brand’s Spring/Summer 2017 Collection, which he styled himself. Gled Luchford shot the ad, which was art-directed by Christopher Simmonds.

For the campaign, which is entitled “Wild Days and Nights,” a band of artists, colorful characters, and models were photographed in the streets of Rome, dressed in Gucci‘s latest collection.

The people in the ad were photo’d with tigers and lions and partying in a marble fountain. Watch the campaign video below: