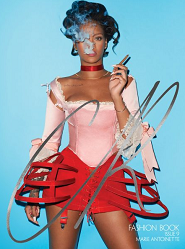 According to a release “As part of the agreement, Hearst will monetize digital and social content and create custom programs for CRFashionBook.com. It will also provide audience amplification, editorial services, and syndication of CR Fashion Book digital content across the Hearst Magazines Digital Media portfolio.”

Print ad sales will be overseen by CR Fashion Book’s publisher Jorge Garcia, while Vladimir Restoin Roitfeld has been appointed president of CR Fashion Book Ltd., the newly created company that will publish the magazine and produce all editorial content.

“I love working with the editors and executives at Hearst Magazines; I trust them and they trust me,” Roitfeld said in a press release. “I have the freedom to express myself creatively and reach tens of millions of readers around the world in Harper’s Bazaar, and now I have found a home where CR Fashion Book can continue grow and thrive, both in print and online.”

Last month, we officially confirmed that Carine Roitfeld and Stephen Gan have terminated their partnership on CR Fashion Book, which first launched in 2012 (See it here).

In the past, Roitfeld served as editor-in-chief of Vogue Paris for nearly a decade.