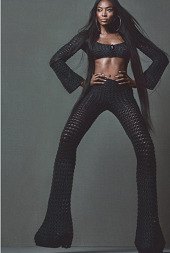 Fashion Model Naomi Campbell is featured in an editorial for the December 2016 issue of W Magazine.

These days, Campbell is putting a lot of her focus into acting. She once had an recurring old in Lee Daniel‘s Empire as Camilla Marks, a seductive conwoman who cannot be easily killed off—even, apparently, with arsenic. “She definitely drank poison,” teases ­Campbell of last season’s shocker moment. “But I can’t say if she died…” What she can confirm is her appearance in Daniels’s newest musical drama, Star, which will debut on December 14, immediately following Season 3 midseason of Empire.

Campbell plays Rose Spencer, the wealthy mother of one of three young women trying to make it as a band. Lenny Kravitz plays Rose’s rock-star husband.

Head over to W Magazine to read more.