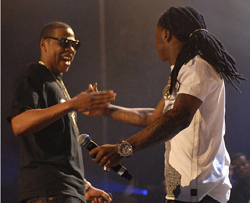 Cash Money is old news. The house that former music mogul Birdman built in the 90s is a thing of the past. Bad contracts, not paying his artists and producers, lawsuit after lawsuit and being disloyal to the people who helped him build Cash Money Records is what caused Birdman‘s empire to fall to the ground.

Over this past weekend at the Camp Flog Gnaw festival in Los Angeles‘ Exposition Park, Lil Wayne was performing “I’m Me” when he starting throwing up the Roc-A-Fella sign. Soon after, instead of saying, “I’m a motherfucking Cash Money millionaire,” he switched up the lyrics with, “I’m a mother Roc-A-Fella millionaire,” which prompted us to believe that he’d signed a deal with Jay Z‘s Roc Nation.

As for Wayne‘s problems with Cash Money, he sued the label for $51 million in 2014. It was reported that he’s owed $10 million, solely for the recording and completion of Tha Carter V. The rapper has referred to himself as a “prisoner” of Cash Money and blames the label for the delay of his new album, Tha Carter V.

← Previous Story New Music: Rick Ross “Kyrie”
Next Story → A Boogie Takes Her On A “Baecation” In His New Visual