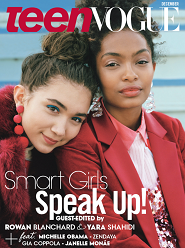 “I met Rowan at Teen Vogue’s Young Hollywood party in 2014. My first impression of her was “ethereal.” It wasn’t just her look or mannerisms but more how she carries herself. Her authenticity bubbles up from within her. Whether you see her speaking to crowds of young future leaders or on television as Riley in Girl Meets World, Rowan emits beams of light and happiness onto other people. And it’s not something she can stop, nor does she try to. Her work, her heartfelt humanitarianism, her art, and her friendships all blossom from a belief that everybody should be allowed to be and live in their truest form, without pressure or recrimination. She is the friend I talk to when I need to process the fragile state of our world, or when I am craving new music or a film to fill my spirit.”

“When I first met Yara, I was taken by her ability to balance academic intelligence and a fondness for James Baldwin quotes with being the friend you text in gibberish at 1 in the morning about the Beyoncé concert you just saw (me: Disnt. Snatwganfxank! Yara: Agrktvfuen rifbrvudhf!). Yara’s seeming contradictions are what make her so singular, especially in a world where the message women and people of color tend to hear is that they can be one thing rather than possess the multitude of identities we all encapsulate. Particularly in Hollywood, which can feel like a hierarchy where girls are encouraged to see each other as competition rather than people worth getting to know, Yara has taught me that sisterhood is thicker than any of these notions. Having a friend like Yara [who plays Zoey on Black-ish] is essential to me as a girl, as an actress, and as a teenager. She has helped me so much, often with-out even knowing it. I keep a journal where I write down important things that I hear, and flipping through it now I realize most of the quotes are Yara’s. She is a wondrous witness to the world, capable of seeing the best of it as well as highlighting the parts we can make better. Yara is proof that teenagers have so much more power than we are capable of digesting and that our voices actually do change things. I am thinking less about our impact on the world at large than I am about the ways we can impact each other and make one another feel less alone.”

Head over to Teen Vogue to read more and watch the video below: