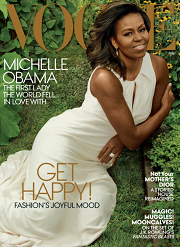 FLOTUS Michelle Obama covers the December 2016 issue of Anna Wintour‘s Vogue magazine. This marks the graduate of Princeton University and Harvard Law School third time covering the fashion glossy: her debut issue was in March 2009, and her second in April 2013.

Could you believe that the Obamas will be making their impending departure from the White House the end of this year?

Head over to Vogue to read the cover story.