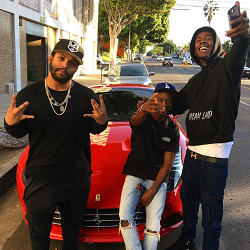 Industry vet Steven Victor, who is the longtime manager to Pusha T, as well as Desiigner, Tyga and The Dream‘s manager, and COO of Kanye West‘s G.O.O.D. Music continues to expand his forever growing resume.

The Hip-Hop entrepreneur has been named senior vice president of A&R at Universal Music Group.

He will now work in all genres, signing new artists and shepherding talent across all of UMG’s labels, which include Interscope-Geffen-A&M, Capitol Music Group, Republic Records, Def Jam Recordings, The Verve Label Group, MCA Nashville and others.

Victor, 36, will continue to run G.O.O.D. Music, which was founded by West in 2004 and began a distribution partnership with Def Jam in 2015. He will also continue running his William Victor Management group. His new role includes seeking opportunities in film, television, branding and publishing for UMG artists

“My ears are open, my heart is open, the doors are wide open,” Victor said of the new opportunity. “And if [artists] have a great idea, we’ll help them actualize it.”