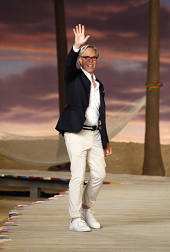 American fashion designer Tommy Hilfiger recently appeared on the Wendy Williams Show. During the interview, he addressed those racist rumors from 1996 one more time. Have you ever heard the rumor that Tommy Hilfiger didn’t want minorities wearing his clothes?

It’s an old rumor; dating back to two decades ago. In 1996, an email boycott was sent out and it went something like this: “Hilfiger allegedly said something along the lines of that if he had known minorities were going to wear his clothes he wouldn’t have made them “so nice” and that he wished they wouldn’t wear them; then he went on the Oprah Winfrey show and stood by those statements.” Come to find out, none of it was true. He had never even been on Oprah when those rumored started. Eventually, he did go on Oprah in 2007 to put the rumors to rest.

And yesterday Tuesday (November 1), he talked about those rumors again while on Wendy. The talk show host asked the fashion mogul if it was true that he said that he didn’t make his Hilfiger clothes for Blacks, Hispanics or Asians and if he said that he didn’t like the way Hip-Hop was wearing his clothing because back than everything was big and baggy and he made everything for elite white people.

Hilfiger denied those rumors. “I always wanted my brand to be offer to a broad range of people, everybody. I wanted to build a big lifestyle brand, globally for everybody.” He also said that Oprah invited him on her show after she heard the rumor, because they’re friends. Before ending this topic, he said that Oprah wanted to dispel the rumors and she knew it was a big fat lie.

Before closing out the interview, Hilfiger talked about how Russell Simmons came to him as friend and told him that he wanted to start a brand, so he helped him start Phat Farm, as well as helped Puff Daddy start Sean John.

Watch the interview below: