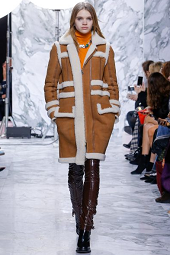 Today, it was reported that Carven plans to name a new artistic director to succeed Alexis Martial and Adrien Caillaudaud.

Martial and Caillaudaud were named artistic directors of Carven‘s women’s collections in March 2015, and just under two years later, the duo are departing “by mutual agreement,” the house confirmed in a brief statement. Their last collection for the brand was Spring 2017, which was shown in Paris last September 29 at Paris Fashion Week.

The statement also noted that a new artistic director would be appointed at a later date.

The pair, who met at the Atelier Chardon Savard fashion school in Paris and both went on to work at Givenchy, had succeeded Guillaume Henry, who exited to join Nina Ricci.

Martial began his career at Givenchy in 2007, working as a knitwear designer on the ready-to-wear and couture lines.

After getting his start designing shoes at Marc Jacobs, Caillaudaud joined Givenchy in 2009 and was responsible for the design of accessories, including jewelry, leather goods, men’s and women’s shoes. More recently, he has consulted for Tod’s and Jil Sander.

The house of Carven was founded in 1945 by the late Madame Carven, the French couturier who traveled the world with her collections and brought back a trove of exotic influences.