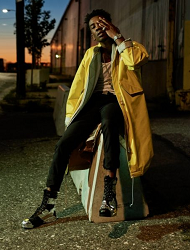 G.O.O.D. Music‘s Desiigner is featured in Interview magazine and for this issue, he was interviewed by the label’s president Pusha T.

PUSHA T: First and foremost man, I want the people to know and understand the inside track: like, Desiigner’s brilliant. For people who have never been in the studio with this man, it’s crazy to see him working. I’ve been privileged to see him in action, but even I have questions. So who inspires you, man?

DESIIGNER: Life itself, creativity itself. All types of music. I’m inspired by everything—all types of sound. You know what time it is!

DESIIGNER: If anything, I would consider my grandfather. He’s a blues player. I like the old soul—you know how it is, Pusha, that old soul. My grandfather, he went by the name Sidney “Guitar Crusher” Selby; he formed that old soul, that old blues, that old rock that I put on my songs. He bluesed it out. And my pops, he was old-school, too; he played that old funk. I fell in love with that old style. You feel me?

PUSHA T: That’s what’s dope to me, because you’re so young and you have all of that great R&B. I hear great R&B knowledge in your records. We just did a record together the other day, and I’m like, “Damn, this just sounds like the R&B I love, even at 39 years old.” And I’m like, “Well, you’ve got to come from somewhere.” You’re married to that old soul, man. You put that flip on the new generation. It comes out crazy. Growing up, how did your peers respond to your musical knowledge? When I was growing up, my friends listened to music casually. They didn’t know old-school blah blah blah. That means your taste level was above everybody else’s. How did you get that across to your peers?

DESIIGNER: People would always be like, “You always act old!” People thought I was an old dude; it came with my swagger. I’m a creator; I’m into this music shit. I wanted to build it up and give it to my peers. I was a singer. I used to sing to the girls, “Happy Birthday” and all that. Did the Temptations. I always knew how to play around with my voice, make people laugh. I’d be crazy. Just my swag I guess. God blessed me. [laughs]

PUSHA T: Yeah, 100 percent. I definitely believe God blessed you. At the same time, it’s like, creativity aside man, you have an ear. What did you hear in “Panda”? When I heard “Panda” first, I was like, “This record is a smash, it’s instant, and you’re killing it.” I could tell that you felt everything you were doing on that track. What did you hear when you first heard that track? You picked this up off of YouTube. I’ve got to know—let me know!

DESIIGNER: When I heard the track, it was like a movie started in my head. It’s like, God put the words in me. The way it started, it’s like I saw the movie in my head and just wrote. I didn’t even think about it, I just blanked out. It was a zone I blanked to. And God was giving me the words. Even today I think about how I make my music, and I’m like …

PUSHA T: I feel it. A lot of people can’t tap into those feelings, and they don’t understand why their music doesn’t connect emotionally. If somebody says, “Damn, I don’t know what Desiigner said,” fine, even if you don’t know, you still feel it. Because you feel it; that’s what you give off. I feel like that really showed itself on “Tiimmy Turner.” Did you compare it to “Panda” at all?

DESIIGNER: I don’t compare my music to anything; I just try to create. I’m big on creativity. I’d do a little something, and I’d put it in between something from another track. It’s just being creative, and putting things that are right together. You feel me? You can’t put bad on beautiful sound. If it’s beautiful, it’s always going to work. I just always work on that. After I made “Panda,” I was working on another track right after that.

PUSHA T: I want people to know, we click. I feel like I’m talking to a genuine person. There’s nothing better than knowing that with everything you do, you’re having a blast doing it. A lot of artists are scared to show their true selves—how come you don’t have that fear? You’re new in the game, too. Everybody else is so afraid to be themselves. Why aren’t you afraid?

DESIIGNER: Because it’s me. You feel me? It’s me being happy and enjoying life. I came from struggle. I came from the block, where I was trapped. I didn’t want to live through that anymore. It wasn’t because I wanted to do that; I was stuck there. Every day I prayed on it. I didn’t want to deal with that. I was shot when I was 14. My mom was crying. I was like … I’m happy if I’m living. I’ve got to do what I’ve always dreamed. I have to keep going. If I have to go from planet to planet, I’ll go. I just kept it hype. I don’t care how nobody feels, because this is me.

PUSHA T: I hope you know that you win, man. Because a lot of people can’t be real with themselves and show their true selves. The album, tell everybody, what can they expect?

PUSHA T: Before we get out of here, as an artist from New York—you’re from Bed-Stuy, man. You’re from Brooklyn. That’s like, dang, every great rapper is from Brooklyn, from right where you’re from or close by. How do you feel being in that line? You’ve made history, you’ve got a hit record right now. You’re a part of a winning team, in representing Brooklyn.

DESIIGNER: It feels great. I’m just here to inspire, I’m ready to inspire and put what needs to be on the map on the map. And there are plenty of others out there that don’t get the coverage—I want to give them the coverage. Brooklyn holds it down.

PUSHA T: For sure. Peace, brother.