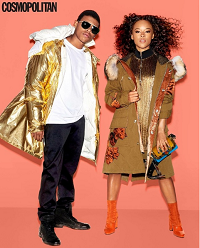 Empire‘s Serayah McNeill (Tiana) and Bryshere Y. Gray (Hakeem Lyon) are featured in the latest issue of Cosmopolitan magazine. The editorial was shot by photographer Yu Tsai and styled by Aya Kanai.

Gray styles in a coat, denim jacket, shirt, tie, pants, and shoes by DSquared2, a coat, tee-shirt and pants by Calvin Klein Collection and boots by The Frye Company.

McNeill wears a coat, dress, and pumps, Miu Miu, a coat, top, boots by 3.1 Phillip Lim and bag by Burberry.

Serayah recently premiered her new single, “Me” on ETOnline. The song is all about female empowerment. “The song reminds me of Beyoncé’s ‘Me, Myself and I,’” the 21-year-old actress-singer, tells ET. “Lyrics in both songs speak to female empowerment, but both are really about self-love.”

“I feel like ‘Me’ is almost an anthem — none of us need approval or love from anyone else to define our worth, all that any of us need is me to be happy,” Serayah adds. Serayah McNeill on what men get wrong about women: “Some guys are nice but put on a bad-boy exterior because they’re trying to protect themselves. A girl just wants to know you care and you’re listening. Bad boys are such an issue, man. I’m learning it’s all about the nice guys.”

Bryshere “Yazz” Gray on what women get wrong about men: “Y’all have pretty much got us figured out. But the thing is, we’re not all dogs and opportunists…” Serayah: “It could happen. If I’ve known them for a while and it’s authentic, I’m not opposed.”

Yazz: “I say keep it professional. Unless it’s Halle Berry. I wish Halle would get a role on Empire. I’m waiting!”

Serayah: “Someone who’s not focused on what they’re doing with their life.”

Yazz: “Asking for a selfie. It’s like, are you serious? If I meet a girl who doesn’t want to take a selfie, I might fall in love.”